The Concrete Donkey is a powerful weapon capable of destroying the most powerful worm, even if he is hiding deep underground. The Donkey descends from the sky and smashes its way down through the landscape until it sinks in the water underneath. This feature is not quite absolute, as very thick landscape can cause the Donkey to stop before it reaches the waterline.

The Concrete Donkey is considered the patron deity of Lightside players, shown by its ability to root out and destroy Darkside tunnelers with unrelenting destruction. It is also visible on the Worship Idol in Worms Reloaded when a player associates with the Lightside. It opposes the Buffalo of Lies, the deity of Darkside play, although argument could be made that Armageddon is the true weapon of Darksiders, which usually destroys any worm on the surface, leaving tunneled-in Darksiders safe.

Any worm in its path gets hammered. Not only this, the Donkey's vibrations are so great that worms in the vicinity suffer damage and will be knocked off any precipice they are near. Any crates or oil cans in the way will explode, wreaking further havoc.

Worms bearing the full brunt of a Donkey strike may suffer hundreds of points of damage, and usually end up sunk due to the direct line the Donkey creates to sea level. The Concrete Donkey makes donkey noises, despite the fact that it is concrete. It is rare, as powerful as the Armageddon and so it is described as a superweapon. It can explode from staying on the level for a very long time.

In Worms Revolution, the Concrete Donkey bounces slightly around the area it was dropped from, this results in an arched path of destruction.

In the book of Worms it is written a voice from the sky said unto Boggy B, 'Let there be Donkey, a great big Concrete one', and Boggy B became flatter. The Concrete Donkey is a weapon for all situations (except maybe fishing), It can be dropped anywhere and destroys both Worms and land until it reaches the water. The damage this weapon can do is 1000+.

Be careful, with a deadly explosion radius it is surely not advised to stand 'too' close when the mule comes-a-knocking!

Like the Air Strike, simply target anywhere and it will appear to strike it, although you cannot control the position of the Concrete Donkey.

In Worms Forts: Under Siege, the Concrete Donkey is called the Trojan Donkey. It is the strongest weapon in the air assault/strike family. Its appearance has changed radically, as it looks more like a seahorse with wheels. This weapon can only be unlocked in deathmatch challenges. Unlike the Concrete Donkey which falls from the sky and bounces, the Trojan Donkey will stay on its position and will soon explode.

The Real Concrete Donkey in Wormopedia

This is the face of the real Concrete Donkey! Andy Davidson, the loony who originally created the concept that we know and love as Worms, was as a young boy led to believe by his parents that this was a real Donkey, encased in concrete and held at their leisure in their garden located in Bournemouth, England. The Concrete Donkey is a most destructive garden ornament and a rare sight to behold in a game of Worms. 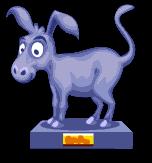 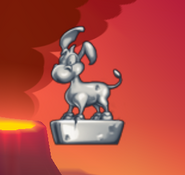 Worms W.M.D's weapon icon
Add a photo to this gallery
Retrieved from "https://worms.fandom.com/wiki/Concrete_Donkey?oldid=21736"
Community content is available under CC-BY-SA unless otherwise noted.