The Electromagnet is a very useful utility and made its first appearance in Worms Open Warfare 2. Electromagnets influence metal-based objects, such as Mines. Sitting close to a repelling Electromagnet may protect a Worm from being hit by stray Mines, while setting an attracting Electromagnet near enemy Worms increases the chances of them being hit. After a few turns or when affected by an E.M.P. Grenade, it loses its charge and become useless. However, it can be reactivated using Lightning Strike. If an Electromagnet is hit by any weapon twice, it will be destroyed. The Electromagnet has about 50 health. The first time a weapon hits it, it will become rusty (this does not affect the strength of the Electromagnet, however). 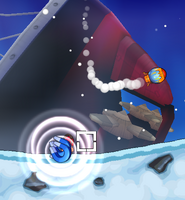 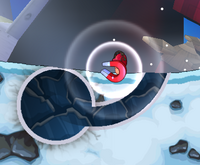 The result of dropping a Bunker Buster next to an attractive Electromagnet.

An Electromagnet repelling an Armageddon meteor.
Add a photo to this gallery
Retrieved from "https://worms.fandom.com/wiki/Electromagnet?oldid=18326"
Community content is available under CC-BY-SA unless otherwise noted.