The Girder is a utility that appears in all Worms games. Using this utility will enable the player to place a metal Girder anywhere nearby.

The Girder is a long thin piece of metal platform that can be placed by the player anywhere nearby. Once placed, the Girder has no special properties over the rest of the terrain. It is usually used by players to make a piece of platform to prevent their Worms from slipping into the water, or to create pathways, but is most often used to protect the player's Worms from incoming threats, or block the opponent's Worms.

Since the Third Generation of Worms games, the length of the Girder can no longer be changed.

The Scientist can place more stubborn Girders which can take more damage. Girders placed by the Scientist will have sparkles around them.

Once the Girder is selected, it can only be moved and placed. The length cannot be changed, except for Worms Forts: Under Siege, where Girders are square wooden platforms with a default size about the same as the top of a Tower, but they also have a much larger size which can be toggled. 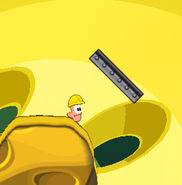 Girder (Worms Reloaded)
Add a photo to this gallery
Retrieved from "https://worms.fandom.com/wiki/Girder?oldid=22178"
Community content is available under CC-BY-SA unless otherwise noted.