The Homing Air Strike is a combination of the Homing Missile and the Air Strike. When a player selects a target, the missiles fly to its specific location. It is only featured in Worms 2 and the Gameboy Advance version of Worms World Party.

The Homing Air Strike, other than a sprite change and the fact that it's homing, is identical to the air strike. It is known to be absurdly powerful (for a non-superweapon) as it can hit a worm virtually anywhere on the map. The fact that all five of the missiles are homing means that if you set a far enough target, all five missiles will hit a centric point, dealing massive damage. 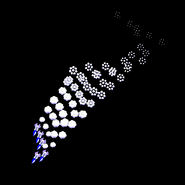 The Homing Air Strike in Worms 2
Add a photo to this gallery
Retrieved from "https://worms.fandom.com/wiki/Homing_Air_Strike?oldid=18612"
Community content is available under CC-BY-SA unless otherwise noted.