Worms 2 to Worms 3D
(with a few exceptions, unavailable in some games)

Low Gravity is a utility which reduces the gravity so that the players' worms can jump higher and launch themselves further. Low Gravity affects all the weapons' bounce. It was replaced in Worms: Open Warfare to Worms: A Space Oddity with a Space landscape, which has permanent Low Gravity and lets all sides have it.

Press the fire button. Please note that this will not consume the user's turn, and only lasts for one turn. 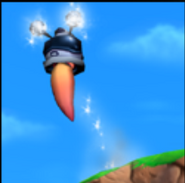