Poison (Worms Revolution and up)

The Old Woman is a walking weapon who first appears in Worms: The Director's Cut.

The Old Woman is basically a walking Dynamite. When deployed, she walks around the landscape slowly with a five-second fuse, jumping over any gaps in the landscape and turning around when she walks into something. Once the fuse ends, she explodes, dealing at least 65 points of damage (75 in 1st and 2nd-generation games) to any worm near her. Much like other animal/walking weapons, she can collect crates.

In Worms Forts: Under Siege and Worms 4: Mayhem, she is able to be manually detonated like the Sheep, but she also can be made to turn and jump manually as well, which makes her more useful than the wooly explosive in many cases.

Starting with Worms Revolution, pressing the fire button before the fuse ends will make the Old Woman fart, producing a gas cloud that poisons other worms.

"This old dear is good for getting those "hard-to-reach" foes. Her ability to cunningly navigate (albeit very slowly) around parts of the landscape is a very unorthdox but valuable trait. With your aid, she could cause more chaos than pension collection day!" 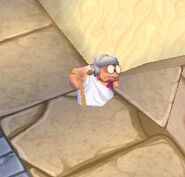 Old Woman in Worms Forts Under Siege with her Greek outfit
Community content is available under CC-BY-SA unless otherwise noted.
Advertisement