The Sentry Gun acts as a turret, firing at nearby enemy Worms that are detected through movement. It first appeared in Worms 4: Mayhem.

The Sentry Gun is an autonomous weapon. It is a six-barreled Gatling gun with ammo fed to it from a box on the contraption. During game-play, the Sentry Gun's color depends on the team's side. After it has been placed, it will fire a large round of bullets at any enemy Worms that get in range, but it can fire only once in the whole turn, so this can be used as an advantage to fool the gun to fire at the landscape to waste its ammo so you can safely move around it or destroy it. The Sentry Gun has a damage up to 25 per salvo and its health is usually 50, 100 or 200 HP. The Sentry Gun smokes and later explodes with the force of a Grenade if it is attacked often. Because of its ability to fire by itself, usually only one Sentry Gun can be placed until destroyed. It cannot normally be added to custom Game Styles in Worms 4: Mayhem, but any custom Game Style based on the "Darksider" or "The Kitchen Sink" Game Styles will include it as well. It also appears to be able to "move" when selected for placement, twitching its four metal legs, which may say that the gun has limited AI.

The Sentry Gun was updated in Worms Open Warfare 2. Its sensory radius is fairly limited and their detection is based on movement. Placing one in front of an enemy Worm will not guarantee damage. The gun will only fire if the Worm voluntarily moves, or is knocked from its current position by other weapons, falling, explosive force, etc. They are useful for Worms who have already used Blow Torches, Pneumatic Drills, Jet Packs, and so on to escape when weak.

—Team17's description of the weapon and its usage.

You can place the Sentry Gun anywhere. In Worms 4: Mayhem, it can only be placed on flat land. 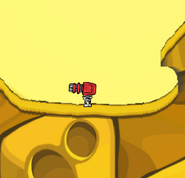 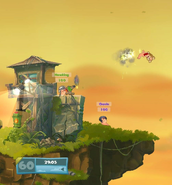 A green team Sentry Gun attacking in Worms W.M.D
Add a photo to this gallery
Retrieved from "https://worms.fandom.com/wiki/Sentry_Gun?oldid=22132"
Community content is available under CC-BY-SA unless otherwise noted.