Worms on Facebook was the online flash game version of Worms, released on Facebook on September 6, 2012, but was shut down on October 22, 2013.

The fulcrum of any worm's arsenal the trusty Bazooka is deadly in the right hands!

The reliable Grenade comes complete with adjustable fuse time and top damage of 30!

This default melee attack is perfect for launching your opponent into the water!

This souped-up Bazooka has increased damage and huge 300% XP bonus! 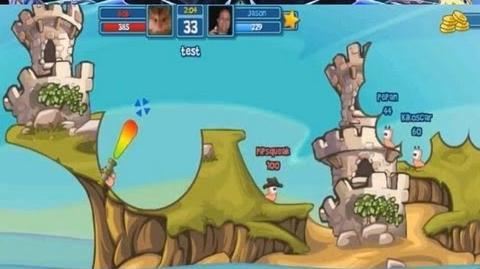 This page is in need of more information. You can improve this article by editing it. Help the Worms improve this wiki!

Retrieved from "https://worms.fandom.com/wiki/Worms_(Facebook)?oldid=19255"
Community content is available under CC-BY-SA unless otherwise noted.