Worms 4: Mayhem is the third installment of the 3D Worms series of games, developed by Team17. It was released in August 5, 2005 for PC, and October 4, 2005 for the PlayStation 2. It is also available for the Xbox. Its features include more detailed customization for the Worms (new additions are Worm outfits and Team Weapons, which you can customize) and a Story Mode consisting of missions where you must travel to different times, such as the Middle Ages.

Worms 4: Mayhem is the first game to have its own story-line.

Starting in the first Tutorial, the player's chosen Worm team arrive at a college, Worminkle University, where grown-up Worms train to become powerful soldiers and soon join the military. At the university, Professor Worminkle (who resembles Albert Einstein and Doc Brown) greets you and says he'll let you join his university if you get rid of drunken enemy Worms from a rival school, who broke into the university's grounds. This serves as the basic weapons training.

The next Tutorial seems to take place some time afterwards with a football game in which the player college's team wins. But members of the opposing team seem to be bitter about this, and refuse to leave. Professor Worminkle tells the player team to deal with them. This is the first live-fire battle, it also counts as a small bit of utility training. The Professor also teaches the player about the Ninja Rope's new feature, which allows a worm to move around landscape objects, such as Crates, Oil Drums, Land Mines, and even Dynamite.

In the next and final Tutorial, Professor Worminkle is proud enough to take the player team to Mike's Secret Laboratory, where they meet Mike, the Professor's "brightest pupil", and the designer of the lab. Then, the Professor and Mike stand in front of an "enormous protective screen", but somehow they lose control of the lab and the malicious Cyberworms (which Mike created) in the containment pods escape and start rampaging, although Mike did not intend to program the Cyberworms to attack anyone. During the battle, the player can learn a little more about advanced weapons (a Sentry Gun is available too, in a Weapon Crate). After the player team defeats the Cyberworms, Mike is upset about his lab being ruined from the battle which took place, while Professor Worminkle states that it was just a test and he and Mike were actually under complete control of the lab (although it appears that he was lying). The Professor congratulates the player team and tells them that they're ready for the real missions.

Worms 4: Mayhem has an actual Story Mode with more details, unlike the Campaign Missions of previous Worms games. Instead of just a few minor quests, detailed background and narrated introductory cut-scenes show the correct information about the background of the mission. After the Tutorials are complete, Story Mode begins. There are five Themes in Story Mode (and in the overall game too), the first is Construction (Present Day), second is Camelot (Middle Ages), third is Wild West, fourth is Arabian, and fifth is Prehistoric (Stone Age). There are five chapters, and each chapter has five missions, with the final mission of the chapter being the "boss fight". The final mission of each chapter can only be unlocked by completing the other four missions first, which can be completed in any order.

In the cut-scene before the player gets to play the missions, Professor Worminkle is seen reading a letter in his office. The Professor quickly hides the letter and greets the player's team once again. He then explains some random mission objectives to the player's team, and states that they must not fail, and that failure would shatter his reputation. He promptly dismisses the class, and now the player can play the missions. In the first chapter of Story Mode (which takes place in the Construction Theme), the player usually has to destroy enemy buildings and their property. After the final mission of the first chapter, Professor Worminkle is revealed to own a Time Machine, which he used to travel back in time with the player's team (in order to run away from the enemy agents) to the Middle Ages (Camelot Theme), where the second chapter begins.

Now begins the fourth chapter, where the Professor and the player team arrive at ancient Arabia. A thief named Ali Baboon steals the Queen of Sheba's jewels, and the player team are tasked with retrieving the jewels for the Time Machine (the jewels are needed for the Time Machine's "Space Time Navigation Balance Device") and stop Ali Baboon. Throughout the chapter, the player team fight Ali Baboon's goons, and in one mission, a few pirate ships that are attacking innocent villagers. In the final mission of that chapter, the player team reach Ali Baboon, but instead of battling him, they must complete his "Thief Training Course" in order to capture him. Once the mission is complete, the Queen of Sheba believes that Professor Worminkle is the one who captured Ali Baboon and returned the jewels. The Queen thanks him and lets him have some of her jewels.

Now the Professor is trying to fix his Time Machine completely, saying it won't take long. However, a small device drops a letter on the floor (which is definitely the letter that the Professor reads in the very first cut-scene of Story Mode). The letter writes:

It is with regret that we have to cease your current research funding grant. We are replacing your university with our new research laboratory.

Thank you for all the research you have done but it is no longer needed.

There are many Challenges in Worms 4: Mayhem. They are included in the game to help the player improve different skills, such as usage of weapons and utilities. There are also 10 Deathmatches at the end. 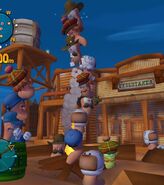 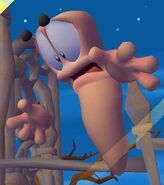 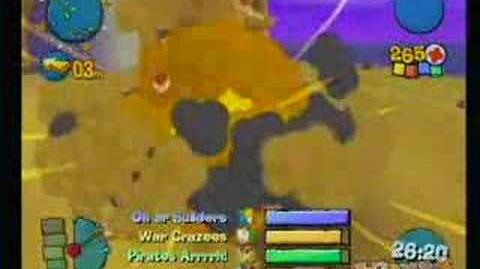 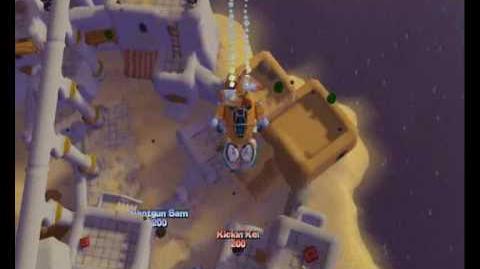 Worms 4 mayhem all weapons
All weapons