Worms Forts: Under Siege is the second games in the 3D Worms series. It was developed by Team17, and published by Sega.

Unlike other Worms games, this game has a different gameplay style. Each team of worms start out on opposite corners of a indestructable map, each with a building known as a Stronghold. Teams can set up other buildings that either give them access to stronger weapons, or can aid them in battle. Teams of worms are defeated by either killing all their worms, or by destroying their Stronghold. Much of the weapons in the game have a medieval theme, and notable weaponry and utilities such as the Ninja Rope and Prod are absent. Much like Worms 3D, the Wormpot returns, now called the "Fortpot", and can change various aspects of gameplay.

The first building that can be constructed. When a player's Worm is atop this structure, it can fire Tier 2 weaponry.

A stronger, more powerful version of the Tower. A Worm on this can fire Tier 3 weapons. Requires 2 Victory Locations. It's also displayed on the game's case.

An extremely powerful building, almost as strong as the Stronghold itself. Capable of firing the most powerful weapons (Tier 5). Requires 4 Victory Locations.

A building with twice the longevity of the Tower that allows the option of spawning deceased Worms, with a small amount of health. Requires 2 Victory Locations.

A small, defenseless building, with half the strength of the Tower. However, it can generate Weapon Crates, making it invaluable in long games. Requires 3 Victory Locations.

The Science Lab increases the power of all your weapons by approximately 50% of their original damage each time one is built. Requires 4 Victory Locations.

The Wonder is strong, but defenseless, and is only used as it allows the player who built it to win in two turns (unless it is demolished). Requires 5 Victory Locations. Also, while the player uses the Freeze tool, the Wonder is not affected and remains defenseless.

The Lighthouse is used to indirectly connect buildings together during many of the missions. When a wall joins to it, it turns the player's color and another Lighthouse lights up nearby which can then be joined to.

In Forts: Under Siege, worms are given access to stronger weapons as they set up buildings. For example, Tier 1 weapons do not require a building to use, and Tier 2 weapons are only usuable on Towers and stronger buildings. Also, not all of the regular weaponry in the series is usuable, with most weapons being made just for this game.

Egyptian: The Egyptian story focuses on a Worm called Seth who tries to raise an army of the dead to battle the Pharaoh.

Greek: The Greek story focuses on the war against Troy and a female Worm called Helen.

Oriental: The Oriental focuses on the Mongol invasions with courses with names beginning with Rise of and Fall of. The last map shows a destroyed Mongol ship - a reference to the tsunami which destroyed the Mongol fleets.

Medieval: The Medieval focuses on King Arthur, and how he became king. The last map is called "Mordred and Morgana", - a reference to the last battle, in which Arthur was fatally wounded. 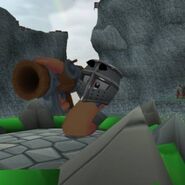 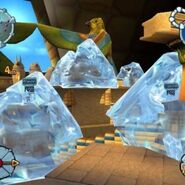