Worms Revolution is a strategy game developed and published by Team17 for consoles and PC. It introduces many new weapons and features, with the most notable being the introduction of a brand new engine. The new engine renders the game's 2D environment in 3D (2.5D), and is capable of advanced water physics; which allows for the generation of water pools above the actual water level. Another new feature is Physics Objects, which can be inert, or contain water, fire or poison. Worms Revolution also introduced classes, which enables specific worms to have specific abilities. It features some of the classic Worms weapons, such as the Super Sheep and the Holy Hand Grenade. Lastly, it also features smoother, more traceable deformation.

A similar version of this game was released for mobile devices, but a different game altogether. It is called Worms 3.

*Bolded text are unlocked via DLC.

The Scout is a tiny nimble worm which can jump very far, but he can get flung really far when hit with a Baseball Bat. Another advantage is that since the Scout is so small, when he uses the Blow Torch he makes a hole so small that the other classes can't fit through. He also gets twice as much fuel for the Jet Pack.

The Scientist is the one with a big cranium. While he is alive all worms on that team will get 5 health per turn. He can also make enhanced versions of Electromagnets and Sentry Guns. The downside is that he isn't a front-line fighter.

The Heavy is a big bulky worm which is very slow. He can however not be moved easily and can knock worms back far. The Heavy will also deal more damage with weapons such as Grenades, Bazookas, Homing Missiles, etc.

*Bolded text are unlocked via DLC.

Worms Revolution Extreme was released on the PlayStation Vita on October 8, 2013. It features all the DLC from the console versions. It also features touchscreen controls, a cross-saving system and a cross-gifting feature called "Treasure Mode" where players can link up with the Vita or PS3 to unlock ten special gifts using the lock and key system. 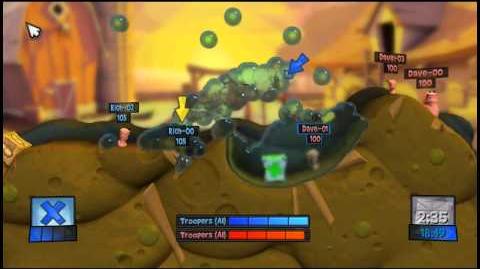 Retrieved from "https://worms.fandom.com/wiki/Worms_Revolution?oldid=21923"
Community content is available under CC-BY-SA unless otherwise noted.